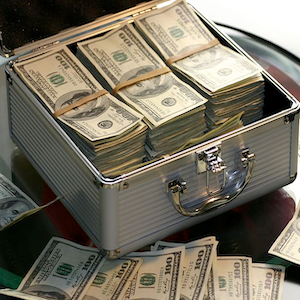 While an unnamed woman became an overnight millionaire by nabbing a cool $1.25 million playing Westgate’s Wheel of Fortune slot, former dentist Gary Goodman made a small fortune from an altogether different avenue. Goodman won a giant $1.3 million settlement after slipping on a liquid spill at Foxwoods Casino in Connecticut, with the fall leading to his retirement from dentistry.

The unnamed woman, who hails from Idaho, made an impromptu detour to Las Vegas before striking it rich at Westgate Casino on May 18 while playing the venue’s popular Wheel of Fortune slot. Westgate this week tweeted a photo of the beaming winner with the million+ win registered on her lucky gaming screen in the background.

According to a story by a leading Las Vegas publication, the lucky Idaho winner hit gold with the $1.25 million Wheel of Fortune bonanza Jackpot after only 4 minutes of play. The story reports that the woman and her husband were originally Texas bound, and decided at the last minute to make a stop in Sin City, and they’re only too happy they did!

Goodman Wins–But Not From Slots

Meanwhile, ex-dentist Gary Goodman attorney confirmed this week that the casino enthusiast had won his $1.3m claim against Foxwoods Resort, CT. The venue is owned and operated by the Mashantucket Pequot Tribal Nation.

According to a local news reporter, Goodman had been walking on the venue’s Grand Pequot concourse, which is located directly next to the Dunkin’ Donuts outlet, when he slipped on a puddle of liquid on the floor. The incident took place nearly five years ago, in June of 2016.

Goodman, according to the details of his claim, sustained several injuries from the fall, including a fracture to his lower leg, torn tendons, and a permanent dislocation of his left ankle. The claim describes the incident as having been the direct result of extreme carelessness and negligence on the part of the casino.

Goodman, 54 years old at the time of the incident, found he could no longer perform his job as a result of his injuries, forcing him into early retirement. His attorney, James Harrington, confirmed the successful settlement had been reached in a court case brought before the Mashantucket Pequot Tribal Court.

Witness accounts reportedly detailed how the liquid had been spilled roughly 20 minutes before Goodman slipped and fell, with several casino employees having been aware of the spill beforehand.