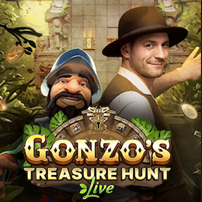 Live casino software giant Evolution has just announced the launch of Gonzo’s Treasure Hunt. This ground-breaking online live game show, which is also the world’s very first casino game that combines live games with slots mechanics, offers players the option to play in virtual reality (VR) mode. The new release is the first of its kind as it breaks through numerous gaming barriers, and it’s sure to be a hit with high rollers.

Gonzo’s Treasure Hunt was inspired by Gonzo, the famed character and intellectual property (IP) from NetEnt’s popular Gonzo’s Quest online slot. This newest game makes for the latest addition to Evolution’s live game shows portfolio and perfectly blends the worlds of live casino games and slots. This blend is representative of an entirely new direction and marks the very first game from Evolution to use NetEnt IP. This follows Evolution’s acquisition of NetEnt at the end of last year.

Evolution’s Chief Product Officer, Todd Haushalter, said that Gonzo’s Treasure Hunt is the firm’s first product to combine the best of NetEnt and Evolution in one. He expressed his excitement at being able to work with the amazing NetEnt intellectual property ever since the acquisition of the firm was first announced. Mr Haushalter went on to say that Evolution is kicking it all off by taking the most famous character in the world of online slots and will be bringing him into the world of live casinos.

The Chief Product Officer went on to say that this game is the first one ever to afford players such a high degree of control over their strategy and the overall potential outcome. In other games, the result is the result - and there is nothing that players can do about it. However, in Gonzo’s Treasure Hunt, players can take control of the outcome as they go hunting for their prizes. This marks an entirely new direction for Evolution’s game shows as the firm seeks to widen its definition of what a game show is. This puts more control into the hands of the players, which is what will help to attract a new audience to Evolution as it continues to evolve what the live casino experience may look like for players.

The new live casino game’s central feature is the search for hidden treasures. Players need to find these treasures hidden within a giant wall that is made up of 70 stones. The famed explorer also comes alive as a VR character and joins hosts and players in the great treasure hunt.

Gonzo’s Treasure Hunt is a truly groundbreaking new release, and proof once again that Evolution is living up to their name!