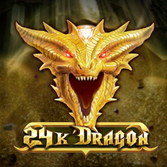 When it comes to naming slots, if the developers use numbers in the title it is generally significant, relating to something in the gameplay mechanics. But few would have thought that the 24,000 in Play’n GO’s new release, 24K Dragon, referred to the maximum payout potential. Yes, the game offers a jackpot payout of 24,000x the original wager, which certainly nothing to be taken lightly.

But, it isn’t just the payout amounts that are impressive about the game. From the stylish artwork to the bombastic soundtrack, 24K Dragon is a premium reel spinning experience.

As the second part of the name suggests, the theme is based around dragons, and not the friendly kind. Fierce, fire breathing monstrosities populate the reels, and the players is given the most dangerous task imaginable; stealing treasure from them.

In terms of graphics, 24K Dragon is about as good as it gets in contemporary slots. A fully animated dragon will make an appearance to the left of the reels, launching fire across the grid in a gloriously impressive display. Meanwhile, the reel-bound symbols are just as well handled, with scaly behemoths animating to shoot fireballs, roar in defiance, and otherwise look incredible.

It is clear that the slot had some top talent working on the visuals, but what about the gameplay?

The 5 reel, 96.2% RTP 24K Dragon has it all, with Play’n GO seeming to want to shove in just about every kind of special feature available. From expanding reels, to respins, and more, it is all here, and fits together into an impressively diverse package of interesting gameplay.

First and foremost, the ways to win start at 1,024, but balloon to a massive 8,192 when the reels have been fully unlocked. But that’s just the tip of the iceberg.

When the Golden Dragon appears on the slot’s reels, players will certainly know about it. Not only because the monster is glorious to behold, but also because it will grant 2 major benefits. First, it will grant an expansion to the reels, adding between 1 and 4 extra rows. Second, because an instant respin will be granted.

If 3 diamond Scatters are matched, things really start to get interesting. During the 8, 15, or 20 Free Spins, the Golden Dragon is back, and better than ever. Each time he appears on the reels, his fireballs are collected, and gradually begin to unlock new rows. Eventually, when all rows are active, the ways to win will reach that 8,192 maximum, and the 24,000x payouts are possible.

24K Dragon is an impressively created slot, and a must play for gambling enthusiasts everywhere.