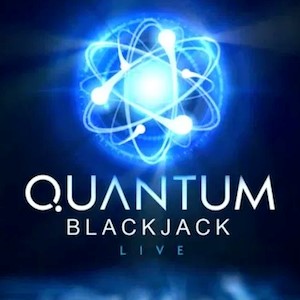 Live Quantum Blackjack was inspired by the amazing success enjoyed by the developer’s live Quantum Roulette title, which was released only a few months prior. Live Quantum Roulette immediately made casino news headlines as it took the classic version of the game and added a unique twist. The game offered the possibility of a Quantum Boost randomly triggering multipliers up to a maximum value of 500x. The incredibly immersive studio experience proved a gigantic hit among players from all over the world and with the release of Live Quantum Blackjack the series was cemented as a firm favourite.

As for how Live Quantum Blackjack works, players take part in several game rounds, after which an additional draw takes place. The timing is determined by a pre-set betting time. Up to 3 cards are then drawn at random and to selected cards are assigned multipliers of either x10, x5 or x3. The exciting bit is that if any of the players participating in the online casino game were to receive a multiplier-empowered playing card and happens to beat the live dealer, the potential to win massive multiplier payouts is instantly created in favour of the lucky player.

About Playtech And Live Games

Live dealer games have increased massively in popularity in recent years. And Playtech has grown into a developer central to the incredible market boom. Today a specialist online casino games developer, Playtech is ready to give any live casino developer a run for its popularity money.

The studio certainly has come a long way since its humble beginnings. Playtech is officially recognised as the world’s largest online gaming software supplier trading on the London Stock Exchange’s main market.

Established in 1999, the brand’s way of doing business has since its very inception been focused on continual development and progress and with a strong sense of building only the strongest of partnerships in licensed jurisdictions.

The big win in Live Quantum Blackjack will only serve to make the brand and the game even more popular, and should attract a greater number of players than ever before.