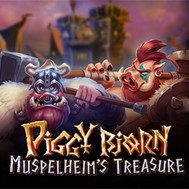 The band of pig Vikings that GameArt introduced in its June 2021 online slot release have already turned a player into a big winner. An anonymous player won a jackpot of more than $2.6 million when they played Piggy Bjorn – Muspelheim’s Treasure in the first week of July.

According to reports, the jackpot landed during the Raid bonus game. The player collected various bonus symbols that led to them collecting all prize values shown on the reels at the time. The result was that the Multiplier turned the win into more than 10,000x the player’s bet.

The total amount of the jackpot came to $2,697,500. Like the player, the online casino was not named in reports about the win.

About The Online Slot

Piggy Bjorn – Muspelheim’s Treasure has 5 reels and 50 paylines, various bonus features, and an action-packed theme that follows the porcine leader and his band of Vikings into the mythical land of fire. The reels are awash with symbols such as various runestones, a shield, a bow and arrow, swords, axes, and hammers.

There also are Loot, Collect, Scatters, Wilds, and other feature symbols that take the form of objects such as shields and various members of the Viking horde. Piggy Bjorn himself is present as the Wild, which can substitute for regular symbols.

The online slot’s main feature is the Raid Bonus, which triggers when 3 Scatters land anywhere on the reels. The round offers as many as 5 Free Spins with reels that do not contain any symbols. Symbols will land as the round progresses.

Piggy Bjorn – Muspelheim’s Treasure also boasts a Fury Raid bonus round. Triggered by a special Scatter, the round is similar to the Raid bonus, although it offers bigger winning chances.

GameArt was established in 2013 and is headquartered on the Mediterranean island of Malta. The online casino provider has additional offices in United Kingdom, Serbia and Slovenia. The studio is well-known for creating games that are mobile-compatible, and now, they’ll go down in history for creating big winners too.

Today could be your Lucky Day. Sign up and enjoy Incredible Online Slot Jackpots and more!